This Sunday, as we conclude the eight-day solemnity of Easter and continue into the liturgical season of Easter, we celebrate the gift of divine mercy. It’s easy to forget sometimes that mercy is not something to which we have a right. The Lord has freely given it to us.

In the First Reading we see the power of healing flowing from Peter and the faith of the people who sought him out. Peter over this last week’s readings has been the first to tell us that the power comes from Jesus, not from him. People in today’s First Reading are just trying to fall under the Peter’s shadow in order to be healed. Peter himself would probably admit that he is a shadow of Our Lord, but the Lord uses him to heal those who seek him, just as those who seek forgiveness and healing through the sacraments draw close to our sacred ministers, knowing that it is Our Lord who heals and forgives through them.

In today’s Second Reading the apostle John has a vision of Our Lord holding the keys “to death and the netherworld.” Our Lord is not identified by name but reveals himself as the “first and the last” to John, who is imprisoned on the isle of Patmos for giving witness to Jesus. His keys represent his authority: specifically, to bind and to loose. If we ask him to liberate us, he will, but we have to ask him. When you see sin as a liberation, not an imprisonment, you see the great gift of mercy. Our Lord’s mercy is the key to liberation from our sins.

Our Lord didn’t have to forgive Thomas for his lack of faith in today’s Gospel, just as Adam and Eve didn’t have to receive mercy after the Fall, a Fall that condemned all their posterity (all of us) to separation from God forever. We didn’t commit the Original Sin, nor was the Lord obliged to forgive it or redeem all of us from its effects. In appearing to the Apostles today Our Lord’s message is one of peace and reconciliation, not condemnation. Our Lord in today’s Gospel empowers his Apostles to be instruments of his mercy.

When a priest or bishop absolves his penitent from his sins, that mercy and power come from Jesus. Instead of remaining in doubt and regret about whether we’ve truly been forgiven Our Lord has given sacraments that in faith we know bring us his forgiveness. Baptism, which we remembered in a special way over these last eight days as we celebrated those who were baptized in the Easter Vigil a little over a week ago, also wipes away sins. All these means of healing and mercy are freely given gifts of Our Lord. We don’t have to receive them, but we’d be fools not to seek them out.

The Risen Lord offers the same gift of lasting peace to us that he offered his first disciples in today’s Gospel. His peace is a gift, and a gift can be accepted or rejected. Are we ready to leave aside the pain and sorrow of sin and really accept his peace? Ask Our Lord for the grace of accepting his peace. You won’t regret it.

With Palm Sunday we begin Holy Week by remembering the Lord’s Passion. The word “Passion,” like the word “love,” is a used and abused term in our day. When we speak of Passion in the case of what Our Lord underwent there’s room for multiple understandings of passion. He shows us passion in all the facets we should live it.

Passion means emotion; in Luke’s account of the Last Supper Our Lord expresses how ardently he desired to be with his disciples before suffering. Passions can be good or bad; he was passionate about his cause. We can only imagine the emotions he was experiencing knowing one of his most trusted friends would betray him. The fear he experienced in Gethsemane of what he was going to undergo. The betrayal and abandonment by his disciples he experienced when things became dangerous, and the torture and ridicule he underwent.

Most importantly, Passion means love. People are encouraged today to be passionate about what they do, and to change what they’re doing if they’re not. We’re expected to love what we do, and we consider people blessed who love what they do. However, the mystery of Christ’s Passion shows us that it is not so much loving what we’re doing as loving those for whom we’re doing it.

You may not love the cross, but you take up your cross daily for those you love. Jesus loves us through the Cross and undergoes the Passion to teach us what passion truly is. Holy Week has begun. In imitation of Christ in these days, contemplate not what you love or don’t love, but whom you are loving through what you do. As we follow Our Lord, step by step, blow by blow, to Calvary, ask him to show you for whom he is suffering: you.

Passion is not just about feeling good or feeling strongly about something. This week we’ll remember the most Passionate moments of Our Lord’s life, and those moments should spur us to a similar Passion. Live this week with the emotion, love, and willingness to sacrifice for others that Our Lord has taught us. 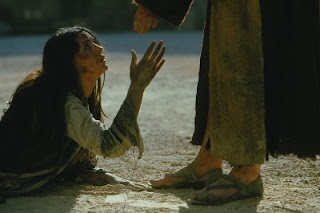