In today’s Gospel we see another example of Our Lord performing a healing and asking for secrecy and not getting it. Why does he keep healing if people don’t respect his wishes? Because he loves us no matter what we do, and will continue to love us, even when we cause him problems. When we contemplate him on the cross we contemplate someone who has taken our problems onto his own shoulders.

The miracle of healing the deaf and mute man is now commemorated by an optional rite in the celebration of Baptism: the minister performing the Baptism touches the ears of the new Christian and says, “Ephphatha!” (“Be opened!”). Our Baptism shows that we and our parents have listened to the Word of God, not just heard him, and that opens our world to hearing good news we’d never have imagined before. With his speech restored we can’t entirely blame the man healed today from going out and sharing the Good News; we too are called to share the Good News.

Have we become deaf to Our Lord’s voice? To his wishes? Let’s ask him to help us listen again in order to better spread the Good News as he wishes. 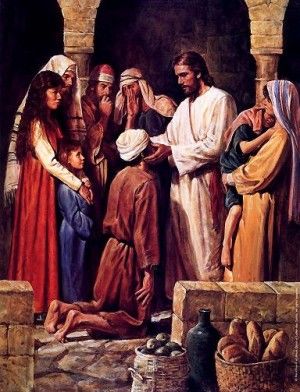 In today’s Gospel Our Lord takes one of his few trips outside of Palestine into Gentile territory. It seems he is trying keep a low profile, perhaps counting on some anonymity to have some quiet time to teach his disciples. However, as the arrival of the woman shows, news of his miracles has even reached Gentile territory. For us, this is nothing surprising, since we know the Gospel is for everyone, but in that moment it was not time yet. We’re faced with a situation similar to Mary at the wedding feast at Cana: the hour for the Gentiles had not yet come.
The Jews called the Gentiles “dogs”: if seems this woman is asking for a favor and receiving a rejection and a racial slur instead. However, in the original Greek the Lord uses the expression, “little dog,” perhaps to show that the example he was using was not meant to insult her, but to explain that what he had to do right now did not involve her: this party, this “food,” was not meant for her.
In her response we find her faith and her humility. She acknowledges that it’s not for her, but also that she’s not asking to take something away from the “children” that they need: a scrap will not starve them, but it’ll mean everything to her.
Our Lord is so generous with us that sometimes we think we’re entitled to what he gives us. Let’s learn from the Syrophoenician woman today to appreciate even the “scraps.”

In today’s Gospel, using the example of dietary laws, Our Lord is teaching us that the “Devil made me do it” as an argument has no merit. The problem of evil has plagued man and philosophy almost since Creation, and a trend has always tried to blame God or other things as the cause of sin when all man needed to do was look in the mirror. The Lord created everything good and for the good, but his creatures freely chose to do evil instead: the fallen angels, staring with the Devil, and humanity, starting with Adam and Eve. If the world is a mess it is because we, sinners, made it so.

The dietary laws in Jesus’ time believed certain foods brought ritual contamination and, therefore, defiled a man, Mark makes a point of saying in his account that Jesus is teaching that there are no ritually impure foods. It’s a teaching that even the first disciples would struggle with as they realized that Christianity was meant to go beyond the Jewish world and culture. The Original Sin of Adam and Eve robbed us of something we, their descendants, couldn’t do without, and it is only thanks to the Redemption that their sin didn’t condemn us all to spiritual death. However, Adam and Eve aren’t to blame for all of it: we too have sinned and continue to sin.

This sobering reality is not meant to discourage us; rather, it makes us realize that not only do we need Savior, but have one: Our Lord. The Sacrament of Reconciliation is also called Confession. Let’s come clean and confess what we’ve done so that Our Lord can heal and liberate us from the sin plaguing the world since the Fall.

In today’s Gospel Jairus and the woman suffering from a hemorrhage teach us that if we take a risk and believe in Christ, things will exceed our expectations. Jairus risked his reputation as a synagogue official, trusting in a Rabbi with miraculous powers with the hope of healing his dying daughter. The ailing woman risked being the fool when she believed she could touch Our Lord’s cloak and receive healing unseen. Her healing and encounter with Our Lord were just in time to give Jairus the encouragement he needed when news reached him of his daughter’s death. Jairus still believed in Our Lord, even when he realized he was now asking for something much greater.

The mourners for the little girl were scornful and incredulous when Our Lord said the girl was only sleeping. As Christians we know Our Lord was saying something much deeper: death is simply a “falling asleep,” as Paul would later say in his letters, awaiting the Resurrection from the dead. Jairus for his faith didn’t have to wait until the life of the world to come to be with his daughter again.

The hemmorraghic woman didn’t expect she’d have to explain herself in front of the crowds. Jairus didn’t expect that he’d be asking for his girl to return to life. They took a risk and had faith in Our Lord, and he blessed them beyond their expectations. Let’s also take a risk of faith. We won’t be disappointed.