Today’s Gospel recalls that when Herod received word that the prophecies regarding the Messiah were starting to be fulfilled he saw it as nothing other than a threat to his leadership. In his twisted obsession with power he thought a toddler was a threat to his reign. Little did he know that he wouldn’t even live long enough to know the Messiah as a a grown up. Today the Church remembers those little children who were a victim of Herod’s “profiling” to ensure his power. The Church believes that even when someone unbaptized dies for Christ, their shed blood “baptizes” them. The Holy Innocents are remembered as martyrs for having shed their blood for Christ. Even though they’d never known him in their short lives, they died for him and came to know him in eternity when his earthly mission was complete.

We remember the Holy Innocents during the Christmas octave because their witness came during Jesus’ childhood, but the suffering of these innocents reminds us of so much suffering by innocent children in the world today: abortion, abuse, child soldiers, trafficking, and so many other forms of exploitation. The Herods of today are ideologues, exploiters preying on the weak, or simply those who see children as a threat to their autonomy, lifestyle, or well being. We must pray children at risk, but also work so that every child is safe, protected, and cherished.

Let’s ask the Holy Innocents to intercede today for all children in danger and at risk, but also to pray that those responsible change their ways and seek forgiveness for what they’ve done. 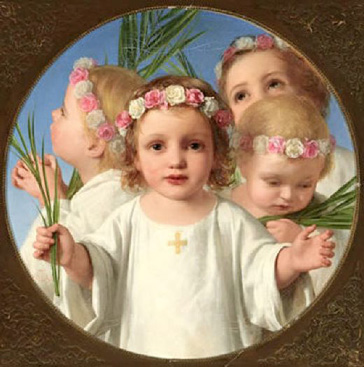