Today’s Gospel is one of the most poignant parables about not only God’s mercy, but the mercy we should show toward sinners as well. Our Lord’s listeners are those who want to condemn sinners, much like the Prodigal Son’s older brother in today’s parable. Our Lord invites them, and us, through the parable to really reflect on whether those things sinners do to us and God are enough to want them to be forever condemned. The short answer is that it is not about what they deserve, but the potentially dire consequences of their actions.

The prodigal son sins against his father; he wants his inheritance even before his father dies, and then shows right away that he wants nothing further to do with him. He tries to liquidate the relationship so that he can face life on his own and enjoy it as he wishes. That desire leads him far from his father not only physically, but spiritually as well. As far as he’s concerned his father is dead in his eyes, past history. Sinners walk the same path; they see the Father, who has lavished so many gifts on them, as cramping their lifestyle. They want the blessings, but they don’t want the obligations and they don’t want anything to do with the source of those blessings. We describe sinners as far from God, but this really means that they try to keep him at a distance, not that he doesn’t want to be close to them.

When things get tough for the prodigal son, and he sees what a cold an uncaring world it is without love, in his own limited way he realizes how stupid he has been. You can’t liquidate a relationship with someone who gave you life itself and a start in the world. He works out in his mind how he expects to be treated, and decides that even if his father treats him like an employee rather than a son he’d be better off. He knows deep down that he must acknowledge his sin to draw close to his father again. The sinner has to be sorry for what he’s done, and this sorrow has to go from just regretting what a mess he’s made of life to being sorry for how he has treated a Father who has loved him unconditionally ever since he dreamed of him in eternity, created him in history, and blessed him throughout his life.

The father keeps an eye on the horizon hoping his son will return. He leaps into action when he sees his son coming. Our Father does the same thing when we are sorry for our sins; he closes that gap we’ve introduced between us and him and is eager to embrace us again. How often we convince ourselves that he’ll treat us like the older brother, considering us brats and ungrateful selfish children who need to be taught a lesson for all we’ve has done? The father himself responds to that attitude when the older brother shows it: “everything I have is yours.” The older brother could have asked for whatever he wished, and the father would have granted it; instead he trapped himself in an outlook on the father that simply reflected his own: resentful, exacting, and merciless. The father tells us the true reason to rejoice when a sinner repents: someone we love returns from death to life.

Lent is a time to ponder the hardness in our hearts regarding those who have wronged us or wronged others and ask ourselves whether we want mercy for them or eternal condemnation. Our Lord teaches us today that mercy toward them is where our hearts should be. Whether they are sorry for their sins or not, we should want mercy for them and pray that they repent and seek it. If, instead of being the older brother, we’re the prodigal son it’s time to come home. The Father awaits us with open arms. 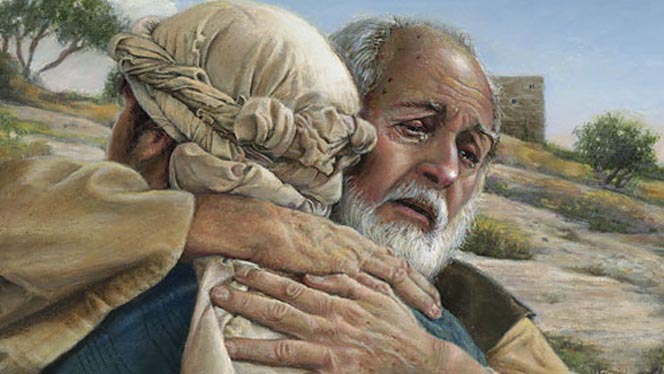