Lent is about a week and a half underway, and today’s readings remind us that everything we’re commemorating during this season hinges on faith in Christ. He reveals to us the meaning of Lent, and he wants to be our light.

Today’s First Reading reminds us that Abraham, our father in faith, set out based on a promise that was fulfilled through Christ. Abram was promised to be the father of a great nation and a blessing for all nations. His name was destined to become renowned, and so it became. He didn’t receive many instructions, just to leave his kinsmen and set out. In the Letter to the Hebrews Abraham is described as our father in faith (cf. Catechism 145-146): “By faith Abraham obeyed when he was called to go out to a place which he was to receive as an inheritance; and he went out, not knowing where he was to go” (Hebrews 11:8).

Hebrews also reminds us that Abraham didn’t receive the entire promise: “not having received what was promised, but having seen it and greeted it from afar” (Hebrews 11:13). In his lifetime he saw a glimpse of the promise, just as the disciples see it in today’s Gospel. Abraham’s son Isaac was the first small sign of one of the Lord’s promises being fulfilled to become the father of a great nation. Yet God asked him to sacrifice his son, and he was prepared to do it. As Abraham was leading Isaac up the mountain, Isaac asked him, innocently, what they were going to sacrifice. Abraham responded, “God will provide himself the lamb for a burnt offering, my son” (Genesis 22:8). This was not just an act of faith; it was prophetic, because the true Lamb that God would provide for sacrifice would be his Son. Abraham only caught a glimpse, in faith, of what would be fully revealed in Christ.

In today’s Second Reading Paul reminds us that Christ was always at the center of our Heavenly Father’s plans, even before we became aware of it. In Christ everything is revealed. Abraham died in faith, but never saw the promise completely fulfilled. When facing hardship we are consoled by considering when it will end. For a Christian the cynical expression “life is hard, then you die” holds no weight. Christ has revealed that “life is hard, and then you live happily ever after” if you have faith in him. Christ has shown that life can have a happy ending, no matter what we endure in our earthly existence. During Holy Week we’ll remember that he didn’t just teach this; he lived it.

In today’s Gospel the Lord’s closest disciples receive a glimpse of his divinity and glory on the mountaintop in order to strengthen them for the trials to come. They see what the fulfillment of the Lord’s promises will look like. The Lord only took Peter, James, and John. They were his closest disciples and had the most need of encouragement. Peter would be entrusted with Christ’s flock in a special way. James would be the first apostle martyred. John would write some of the most sublime words of Sacred Scripture.

Our Lord’s face and clothes became as light. His face, like sunlight, represents his person and, in this moment, his divinity. Moses and Elijah converse with Jesus. Our Lord is at the center. The Law (represented by Moses) and the Prophets (represented by Elijah) point to him. If a transfigured Christ flanked by the greatest exponents of the Law and the Prophets is not enough, a theophany occurs as well: God the Father identifies Jesus as his son, and how pleased he is with him. If Peter, James, and John had not believed in Christ they wouldn’t even be on this mountain. Their faith necessitated a glimpse of the promise that would prepare them for the trials and tragedy to come.

Life presents hardships, but the strength to face and overcome them does not always come in the moment. Our Lord prepares us for crosses, just as he prepared his disciples in today’s Gospel. Let’s open our hearts to his preparation and inspiration and not be afraid. 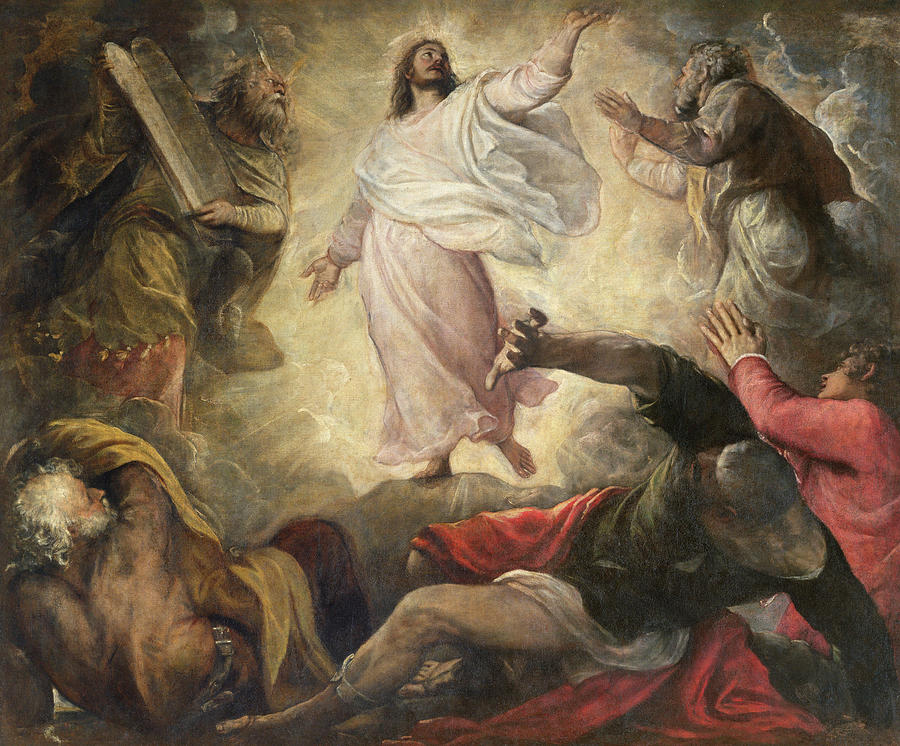