The world’s take on Mary is pretty lightweight, and the solemnity we celebrate today sheds a different light on Mary’s role in the history of salvation. We can let the world’s take on her influence our thinking and think she was a little protected Palestinian flower who God treated like a Jewish princess, but that does not cut it: Mary was the most perfect creature. So perfect she’s living the Apocalypse now.

Today we celebrate a path that we’re all called to walk: from here to Heaven. We celebrate Mary’s assumption, body and soul, into Heaven after her time upon this world. Mary received the grace to be body and soul in Heaven along with her son. The other just souls that have preceded us are in Heaven, but they’re separated from their bodies until the Last Day when Our Lord raises everyone from the dead in the Last Judgment. Our Lord ascended into Heaven in glory; Our Blessed Mother was assumed into Heaven.

The First Reading today reminds us that Apocalypse and Revelation are synonymous. The apostle John had years to reflect on Mary’s Assumption, and in the First Reading he tries to express her role in the Church yesterday, today, and forever.

She is clad in the sun: in Revelation the justified are simply clad in white, but Mary’s brilliant clothing shows the graces she’d received from God are even more dazzling. The moon is under her feet: as the most perfect creature the heavenly bodies are subjected to her, not the other way around. Crowned with twelve stars: the queen of the apostles and the mother of the Church in the order of grace. Totally beyond the dragon’s power: it can sweep the stars from heaven, but it cannot defeat the mother of God or her mission to be the mother of the Redeemer and our mother.

When the Jew’s Kingdom in this world, under Saul, then David, then Solomon fell flat, they looked forward to a Kingdom of the future, but the future Kingdom they had in mind wasn’t much different from the Kingdom they dreamed for in the here and now. Christ showed them the “Kingdom at hand,” and it wasn’t what they expected. It was a Kingdom only seen by faith, starting here and now in this world, and only achieving its full glory in the world to come.

In today’s Second Reading St. Paul reminds us that Christ was the first fruits of the definitive victory over death that was to come. At the end, “[Our Lord] hands over the Kingdom to his God and Father, … For he must reign until he has put all his enemies under his feet … the last enemy to be destroyed is death.” The Assumption is God’s reminder of that victory to come. Whether Mary died at the end of her time on earth is not clear, but the decay of death did not spoil her. Taken up body and soul into Heaven, her Son’s final victory was shown in her.

Through Mary’s fiat her desires for the Kingdom, that she sings for in the Magnificat, coincide perfectly with that reality to come, and she accepts it and strives for it with total faith. Mary was no spared little flower. When the Kingdom took flesh in her womb she had Joseph to contend with, a flight to Egypt, thirty years of silence in Nazareth, three years seeing how many people did not accept her Son’s message, then Calvary and her greatest commission: to be mother of the apostles and of the whole Church.  She’s continuing that mission, body and soul, from Heaven, showing us what is to come as long as we keep working and hoping.

In today’s Gospel Elizabeth rejoices that her cousin had come to visit, not just because she was glad to see her kin, but because Mary is aglow with accepting the invitation to become the Mother of God. John leaps in the womb at the presence of Jesus in Mary’s womb. Their missions are closely linked. Elizabeth blesses Mary because she “believed that what was spoken to you by the Lord would be fulfilled.” Mary was extraordinarily blessed because she believed in the Lord, and in the Assumption we see that she believed in the Lord throughout her earthly life and beyond. Mary doesn’t take credit. She glorifies the Lord with her canticle, and now she does so in eternity.

Contemplating the Assumption of Mary into Heaven reminds us that suffering and trials are also gifts from God. It was not easy for Mary, but she made it. Mary’s Assumption reminds us of what awaits us if we accept suffering and trials with patience and faith, desiring to help Our Lord accomplish the work of redemption. Let’s pray today that Mary help us make the journey to Heaven and one day shine there alongside her and her Son.

Today we celebrate Mary being taken up, body and soul, into Heaven at the end of her life here on earth. She reminds us today that life is not truly taken away; it simply changes and, for those who have persevered in the faith like Mary, it blossoms into an eternal and glorified life: in the Eastern Churches this solemnity is known as the Feast of the Dormition, commemorating when Mary simply went to sleep.

Mary’s Assumption consoles us with the confidence that those who face the end of the earthly phase of their life have nothing to fear if they have lived it well. Even if they haven’t lived it well, when the end of life here below comes all they have to do is entrust themselves to the Lord’s mercy and they’ll have nothing to fear. Christian faith and hope in the Resurrection and eternal life help us and our loved ones to face the end of life here below with serenity, no matter how tragic the circumstances.

Our Blessed Mother has simply moved, and, as so many apparitions attest, she is still very active in making sure all her children will join her one day, body and soul, in Heaven. Through Mary’s intercession let’s pray for the grace of a good life and for the grace of a Christian hope that doesn’t fear death. Today we celebrate a path that we’re all called to walk: from here to Heaven. We celebrate Mary’s assumption, body and soul, into Heaven after her time upon this world. Mary received the grace to be body and soul in Heaven along with her son. The other just souls that have preceded us are in Heaven, but they’re separated from their bodies until the Last Day when Our Lord raises everyone from the dead in the Last Judgment. Some Old Testament figures may have received this grace as well (such as Elijah and Enoch), but we know for certain that Mary and Jesus are in Heaven, body and soul. As the Second Reading reminds us, Jesus ascended, body and soul, to take his place at the right hand of the Father and intercede for us. Upon taking his place in Heaven he received the reward for accomplishing his mission on earth and made it possible for us to arrive there one day as well.

Why did Mary receive this grace as well? Sometimes we can think that she merited special treatment (the Immaculate Conception, the vocation to be the Mother of God, etc.) for no other reason than the goodness of God and the fact of being his mother. It’s important to remember that not everything was easy for Mary. God’s gifts are meant to help each one of us to fulfill our role in the work of redemption, either by strengthening us or by giving us an opportunity to bear spiritual fruit. Mary received special gifts that make us praise God for her, but hidden ones as well. After accepting the invitation to be the Mother of God she gave birth to Jesus in a cave, she had to flee to Egypt, she had to spend thirty years in Nazareth before his public ministry, all the way to seeing her son dead on the cross and buried in the tomb.

Contemplating the assumption of Mary into Heaven reminds us that suffering and trials are also gifts from God, and what awaits us if we accept suffering and trials with patience and faith, desiring to help Our Lord accomplish the work of redemption. Let’s pray today that Mary help us make the journey to Heaven and one day shine their alongside her and her Son. 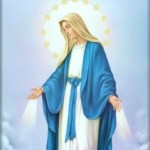