In today’s First Reading those who remained faithful to the Lord despite all the persecution and calamity now sing his praises. The Song of Moses refers to the song the Israelites sung when they were delivered from destruction by the Egyptians due to the parting and crossing of the Red Sea (Exodus 15:1–21; see Exodus 14:19-31). Christ, the New Moses, has also led them through calamity and persecution into the Promised Land. It’s the moment of victory at the end of time when evil is definitively overthrown.

As part of the faithful’s song they rejoice that the Lord’s “righteous acts have been revealed.” At the end we will see completely how good and righteous Our Lord is. We may not see it clearly in this life, afflicted by suffering and evil, but we must trust and believe in it and it will be revealed one day for all to see.

We’ve already been delivered from evil through Baptism: the crossing of the waters of the Red Sea is a prefiguration of the salvation that comes through the water of Baptism. Let’s live in hope that the victory one day will be complete.

In today’s First Reading John shares a vision of the Last Judgment. Christ the King comes on a cloud, reminiscent of the prophecy of the Book of Daniel regarding a son of man (see Daniel 7:13). He bears a sickle because the time of harvest is at hand; Our Lord preached about the need for a grain of wheat to fall into the ground and die in order to bear fruit, and now all those grains of wheat have grown to maturity and are ready to be harvested. This is the gathering of the chosen.

Do you see the Bread of Life in your future or the wine of wrath? It’s up to you. 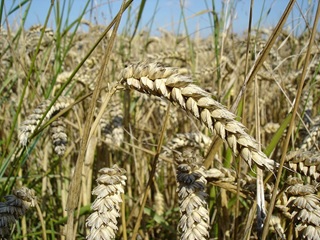 In today’s First Reading, amidst the calamities and evils narrated in the book of Revelation, John has a consoling vision of the righteous surrounding Our Lord (the Lamb). Mount Zion refers to Jerusalem, the traditional place where the faithful remnant will gather under the Messiah’s reign. The righteous bear the name of the Father and the Lamb on their foreheads, in contrast with the pagans who bear the name or number of the Beast.

They follow the Lamb wherever he goes, which means they followed him all the way to Heaven, but by way of Calvary. They’re faithful disciples who have no deceit on their lips because they didn’t deny Christ or do homage to the Beast. Lying is characteristic of the opponents of Christ. They’re unblemished because they have made a perfect untainted sacrifice of themselves to God, singing a song of praise unique to them because it comes from a heart that loves Our Lord completely.

Any one of us could form part of this group, because everyone is called to holiness. All we have to do is offer Our Lord everything we have and are, fulfilling the duties of our state of life (married, consecrated, ordained, etc.) with love for him and for souls. It’s never too late on this earth to start.

In today’s First Reading the tribes of Israel come to David and acknowledge them as their king. In today’s solemnity believers in Heaven and on earth acknowledge Our Lord and Redeemer as the King of not just an earthly kingdom, but of all creation, a reign that will only fully be revealed at the end of time.

Today’s Second Reading reminds us that we’ve already become a part of his kingdom, rescued through baptism from the reign of sin and death that oppresses and dominates a fallen world. All of creation was made with the Son in mind, and all of creation becomes his throne from which he conquers sin and death in order to present the kingdom to Our Heavenly Father at the end of time. Therefore today, the last Sunday this year in Ordinary time, we remember Our Lord reigning from his cross, but especially the day when he will return in glory and his reign will be total and complete.

The good thief crucified alongside Our Lord in today’s Gospel thought he would only be remembered in the kingdom to come, and Our Lord promised him paradise. We were born into sin and death, original sin, and rescued through Baptism, but we can return to slavery if we don’t turn to Our Lord repentant and ask to be remembered in his kingdom. Let’s ask him to reign in our lives, today and forever. 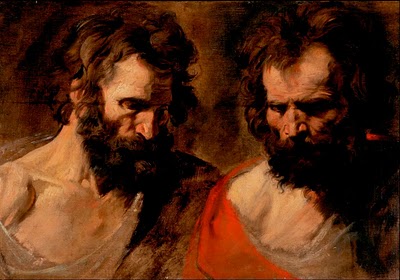