The Third Sunday of Advent is also called Gaudete Sunday because of the first word of the entrance antiphon. Gaudete is Latin for rejoice; each reading today is an invitation to joy because the Lord is near or in our midst. In today’s Gospel people are flocking to John because expectation is building that a change for the better is at hand. People from all walks of life are approaching John and asking advice on the right thing to do. They’re willing to share and willing to be fair in their dealings with others. A better society is at hand, which is why they start asking themselves whether John is the Christ.

John tells them that the Christ is coming and promises something even better than what he is calling for: a salutary shake-up. Winnowing fans were used to toss grain and straw into the air: the straw and chaff would blow away, leaving the grain to fall back onto the floor. The “grain” is everyone and everything good and just, while the “chaff” is burned as bad and useless. Even if a shake-up was coming, it was for the sake of good, not evil.

Just as John is preparing the way and telling them the Lord is close, so Advent has now reached it’s fourth week. Let’s follow John’s advice: let’s share with others and strive to be more fair to them in this Advent season. 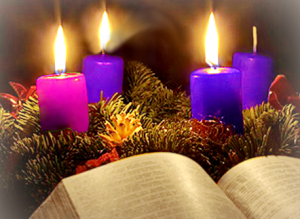