In today’s First Reading Paul describes the Church as the Body of Christ. In his time Greco-Roman culture explained how all the members of society fit together using the image of a body, and Paul might have received some inspiration from this philosophy, but he goes beyond it to emphasize that the Church is the Body of Christ because the Church has Christ as her Head, giving her life and direction. What later reflection would describe as the Body of Christ is not a moral body, people just united by some external purpose, or a physical body, where the parts lose their individuality in the whole. Rather, it is a Mystical Body that depends on her Head, Christ, in order to have direction and life, made possible by the Holy Spirit, who unites her spiritually.

We don’t stop being individuals by being members of the Body of Christ, but we do receive life from it and must perform our function for its life and growth as well. Paul describes various figures in the early Church comprising the Body and helping to edify it: Apostles, prophets, teachers, and so on. Each has a role, like a part of a body, but not all have the same role. The important thing is that the parts work together for the good of the Body, and remain united to their Head, otherwise they’ll not get very far.

Paul describes the signs of the Body working well: unity, charity, and maturity. Let’s ask Our Lord to help us edify his Mystical Body in whatever role to which he has called us. 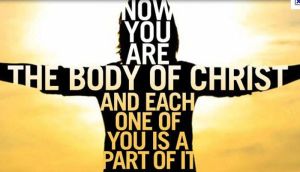