For the Fourth Sunday of Lent we recall Our Lord’s healing of a blind man that brought many more things to light than just one man’s eyesight. It teaches us how blind we can be to what’s really going on. The Lord wants to cure us of the worst blindness: a spiritual one. Through faith in the Son of man we receive a deeper interior vision beyond our physical sight thanks to Christ, the light of the world.

In today’s First Reading the prophet Samuel has been sent to the house of Jesse in order to identify and anoint the new king of Israel. He’s been sent by the Lord to anoint a replacement for King Saul, who was a tall, golden-haired, powerful man who chose to ignore the Lord’s command because he feared public opinion. Samuel thought Jesse’s son Eliab would be a good replacement, because he was tall and handsome, much like Saul. The Lord shuts him down right away: “man sees the appearance but the Lord looks into the heart.” David was not considered important enough to even invite to the feast. His father sent him to go do something “useful” while the big boys attended to serious things.

We all know how the story of King David goes from there. He not only becomes the greatest king of Israel (before Christ), but establishes the dynasty in which Christ will be born as the Messiah, the definitive king of Israel. Our Lord always looks into heart and helps bring the truth of people to light.

In today’s Second Reading Paul reminds us that the Lord has brought us from darkness into light, and that light has exposed the good and the bad. Humanity was in darkness until the light of Christ came to lead us out of it. Sin not only disfigures us, it blinds us. With impaired vision and everyone disfigured it was impossible for us to see the right way to live without Our Lord’s help. It seems paradoxical that light is needed to recognize darkness, but before the coming of Christ the darkness of sin did an admirable job of presenting itself as very enlightened. Paul puts Christians who’ve now received the light of Christ on guard against a worldly outlook that seems enlightened, but actually is darkness and fruitless.

In today’s Gospel the Lord heals a blind man and helps to see with an entirely new level of light, the light of truth. This light shines on everyone involved in the story, and that light is Christ. The man born blind not only received the gift of sight, he received an opportunity to see that Jesus had been sent by the Father and had the power of God to heal. He saw a miracle happen.

The disciples thought his blindness was due to either his sin or the sin of his parents. Our Lord corrected them. His healing was to show God at work. The man born blind wanted to get on with his life, but his neighbors insisted on taking him to the Pharisees, because Jesus had healed him on the Sabbath. Our Lord had performed a miracle on the Sabbath. If God had not wanted to work miracles on the Sabbath, he would not have healed the blind man. Yet he did.

The Pharisees showed how blind they were to the will of God. They wanted to condemn Jesus as a sinner breaking the Sabbath because that was the way they saw the world. Their interpretation of the Law of Moses. The man born blind could not deny what was right in front of his face. At this point the Pharisees had decided to cast out anyone who said Jesus was the Messiah. He didn’t claim Jesus was the Messiah, but when he presented irrefutable logic to the Pharisees: “  We know that God does not listen to sinners, but if one is devout and does his will, he listens to him … If this man were not from God, he would not be able to do anything.” His healing was to show God working, but the Pharisees couldn’t accept that, and cast him out.

Jesus went looking for him and gave him the opportunity to believe in him as the Messiah, and he accepted whole-heartedly. Our Lord had not just restored his sight; he’d given him the light to see salvation at his doorstep and the need to give witness to it.Christ showed the Pharisees that they weren’t blind, a motive for innocence for their attitude. They chose not to accept what they saw.

Lent may be a somber time of penance, but it is also a great time of spiritual light. Ask Our Lord to open your eyes to whatever thing in your life separates you from him. 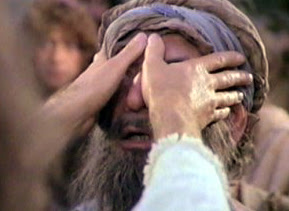