In today’s Gospel Jairus and the woman suffering from a hemorrhage teach us that if we take a risk and believe in Christ, things will exceed our expectations. Jairus risked his reputation as a synagogue official, trusting in a Rabbi with miraculous powers with the hope of healing his dying daughter. The ailing woman risked being the fool when she believed she could touch Our Lord’s cloak and receive healing unseen. Her healing and encounter with Our Lord were just in time to give Jairus the encouragement he needed when news reached him of his daughter’s death. Jairus still believed in Our Lord, even when he realized he was now asking for something much greater.

The mourners for the little girl were scornful and incredulous when Our Lord said the girl was only sleeping. As Christians we know Our Lord was saying something much deeper: death is simply a “falling asleep,” as Paul would later say in his letters, awaiting the Resurrection from the dead. Jairus for his faith didn’t have to wait until the life of the world to come to be with his daughter again.

The hemmorraghic woman didn’t expect she’d have to explain herself in front of the crowds. Jairus didn’t expect that he’d be asking for his girl to return to life. They took a risk and had faith in Our Lord, and he blessed them beyond their expectations. Let’s also take a risk of faith. We won’t be disappointed. 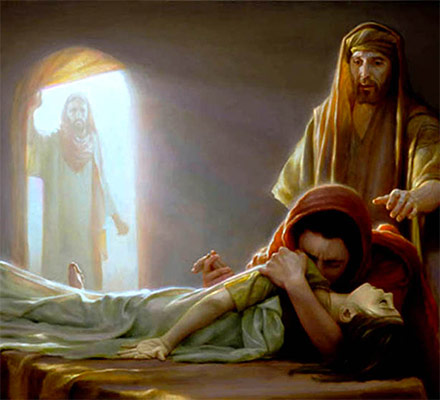