As St. Paul recalls in today’s First Reading, he thought his purpose and mission were as clear as day: to hunt down and imprison those who followed the “Way” as transgressors of the traditions of Israel. He had official support  and was expanding his operation, but on a bright day, at midday, just outside Damascus he realized the “light” he was guiding himself by was nothing in comparison to the light of the revelation he had just received: that Jesus was the Lord and that he was persecuting the very Lord he should be serving. He was not just knocked off his feet and blinded physically, but spiritually as well. After being so certain of the course his life should take he ended up being led by the hand into the very city he was supposed to police in order to await further instructions.

St. Paul is an apostle because he had a direct experience of the Risen Lord. We commemorate that life-changing moment for him today because it defined the rest of his life. God’s will had been revealed to him after years of thinking he knew it all. An experience of Christ changed all that, an experience he had to give witness to, just as the Twelve did. The very passage we read today is the second account of Paul’s conversion in the Acts of the Apostles, from his own lips, giving witness to why he was an apostle to the very crowd that had just tried to tear him apart.

There are many poignant conversion stories in salvation history. Even a baptized and professing Christian can have a moment of spiritual conversion where their understanding of the faith and their role in sharing it pales in the light of what God chooses to reveal. Christ wants to be your light, just as he was St. Paul’s. Let him. 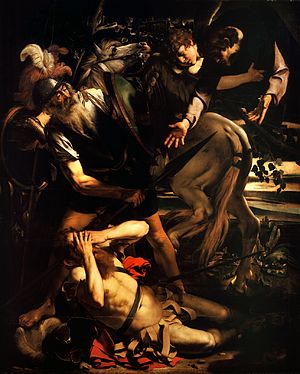