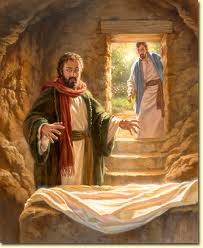 Today’s Gospel, recommended for celebrations on the afternoon or evening of Easter Sunday, presents a thematic continuity with the Gospel of yesterday‘s Easter Vigil. The implications of the Resurrection are continuing to “dawn” on the disciples that first Easter Sunday, and now, in the evening that day, the “dawn” spreads to the disciples on the road to Emmaus. They too did not believe the holy women’s announcement of what had happened, just like the Apostles. Things were just not turning out as they’d hoped, so they were calling it quits and heading home.

Our Lord calls them foolish, but he doesn’t abandon them to their ignorance. They are not trying to interpret the events scripturally, which is a recipe for failure: how do you rationalize someone rising from the dead? You can’t fathom it through any text book or science other than the Word and science of God. God has to help the profound and amazing reality of the Resurrection “dawn” on them. Even with hearts burning they don’t recognize him until he’s vanished from their sight, but now the light of Christ has dawned on them and they too must spread the news.

We have a new Easter season ahead of us. The contemplation of the Resurrection is not just for today; we have an entire liturgical season to go deeper in the mystery. Let’s spend this Easter season asking Our Lord to help understand his Word, written or otherwise, regarding the new life that has begun not only in him, but in us. This light is not just for us, but for others as well.

It’s fitting that for the Mass during the day on Christmas the Gospel should be taken from the prologue of John the Evangelist: daytime is the brightest moment on Christmas Day, and John’s Gospel reflects a long life contemplating the wonder and mystery of God. We need spiritual light to reveal the profundity of this day. We need to gaze upon the manger, gaze upon the baby Jesus, and remind ourselves: “this is God, and he’s come to save and love me.” In a cave in Bethlehem, probably in a little hollowed out part of rock filled with some straw, God was born as a baby boy for me. What does that say about him, and what does that say about me?

As John reminds us in today’s Gospel, the true light that enlightens everyone has come into the world with the Incarnation and birth of Jesus. The Second Reading reminds us that in Jesus God has now said it all. It was unexpected and, to many, unobserved, but starting with the Holy Family those who received him in faith gained the ability to become, like the Son, children of God. We gaze today upon the baby Jesus in a manger and see the Word whom God the Father had in mind when he created the whole world. The baby Jesus is the key that unlocks the meaning of our existence here on earth; and even in a manger the Word is communicating to us.

Let’s kneel in spirit today before God in a manger and ask him to fill us with grace and truth. 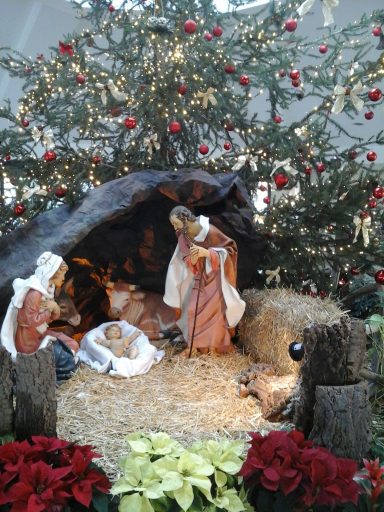 As St. Paul reminds us in the Second Reading, an outlook of faith keeps our eyes fixed on the things of above, where we know the Risen Christ stands at the right hand of His Father and intercedes for us. Like John in today’s Gospel let’s look at the signs of Jesus’ resurrection–an empty tomb, a suspiciously well-folded head wrapping–and simply believe. Our Lord will reveal himself to us and transform us in this Easter season and beyond.